At the invitation of the President of the People’s Republic of China, His Excellency Xi Jinping, Her Majesty the Queen of Denmark and His Royal Highness the Prince Consort are this week paying a state visit to China accompanied by four ministers and the largest ever Danish business delegation with 161 companies present including representatives from Haldor Topsoe A/S.

As part of the visit, a signing ceremony between Haldor Topsoe A/S and Tianjin Economic Technological Development Area (TEDA) was held Friday at Fanghua Garden located in the state guesthouse in Beijing overseen by the Her Majesty the Queen and Mr. Yang Jiechi, China’s State Counseller and former Minister of Foreign Affairs.

The signing marks the second phase of Haldor Topsoe’s investment agreement with TEDA for the construction of an automotive catalyst plant in Tianjin representing a total capital investment of 900 million DKK. The construction of the plant is ongoing, and production will begin in early 2015.

The catalyst production plant in Tianjin will be focused on manufacturing products in high volumes for the Chinese market that can be used to remove NOx from the engine exhaust of diesel vehicles namely medium and heavy duty vehicles such as light commercial vehicles, buses and trucks. Once equipped, these catalysts will be able to make a notable impact on reducing air pollution in urban environments in China, where as much as 20% of air pollution is estimated to stem from vehicles.

In addition to cementing political and economic cooperation and improving cultural exchange, the overall theme of this week’s visit is how Denmark and Danish companies can support China on its path to sustainable development. In this regard, Haldor Topsoe’s 74 years’ of experience in providing highly advanced energy-efficient solutions based on catalysis represent a valuable asset that China can leverage to solve some of the country’s most pressing environmental issues.

“Delivering efficient automotive catalysts is only part of our business in China. We also offer larger, stationary catalytic solutions for cleaning off-gasses from a wide range of industrial sources, including fossil-fuel and biomass-fired utility boilers, gas turbines, oil refining and chemical plants, and waste incinerators for example. These technologies have proven their worth for years in Europe and North America and hold a huge potential in terms of curbing air pollution in China”, says Bjerne S. Clausen, President and Chief Executive Officer of Haldor Topsoe and continues:

“Another area related to reducing air pollution lies in the upgrading of fuels to higher environmental standards. In this field, Topsoe can help Chinese refiners produce cleaner fuels that meet stricter environmental regulation. In fact more than 40% of ultralow sulfur diesel in the world is currently produced using catalysts and technology from Topsoe”, says Bjerne S. Clausen, President and Chief Executive Officer of Haldor Topsoe.

Facts about Haldor Topsoe and China

• Denmark and China have a long track record of collaboration in the climate and energy field, and over the years Topsoe has been a reliable partner in supporting China on its path towards sustainable urbanization.

• Topsoe established offices in Beijing in 1984, but has a track record of doing business in the country that goes even further back. Topsoe currently employs nearly 100 people and over the years the company has signed more than 100 engineering contracts and 1000 catalyst contracts with Chinese counterparts.

• As a market China is growing fast and now represents one of Topsoe’s largest markets in the world with a revenue in excess of 100 mio. USD. Topsoe continues to see opportunities in China with growing domestic demand and a 12th Five-Year Plan focused on balanced growth and sustainability.

• The intention to build a new production plant in China was announced by Haldor Topsoe in June 2012 during former Chinese President Hu Jintao’s state visit to Denmark. This was followed up by the signing of an investment agreement, which took place in Tianjin during Danish Prime Minister Helle Thorning-Schmidts official visit to China in 2012. 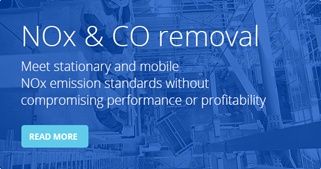