On the occasion of Dr. Topsøe’s birthday, here’s a story about how his approach to science is still alive and well in the company.

Dr. Haldor Topsøe would often summarize his approach to business with the catch phrase “from science to dollars”. But what did he actually mean by that?

I think what he implied was that a fundamental research should be the basis for commercial success. He unceasingly experimented with innovative equipment to get a deeper understanding of catalysis and, ultimately, design better products.

Today, we still continue down this path. Our long history of dedication to catalysis is also reflected in the fact that we are internationally known not only in the business but also in academia. Thanks to such reputation, we have been able to attract the best people, and many of our scientists are recognized for their work around the world.

Most importantly, and that is probably what distinguishes Topsoe the most, we do a lot of high-level research in-house, based on the newest equipment and conducted by leading experts in the field. One of the most recognized research areas where we have been doing cutting-edge research is the transmission electron microscopy (TEM), which allows to obtain a view of our catalysts down to the atomic scale.

The spectacular TEM images showing the dynamics of methanol synthesis catalysts have gone around the world and still today represent a milestone in catalysis research. 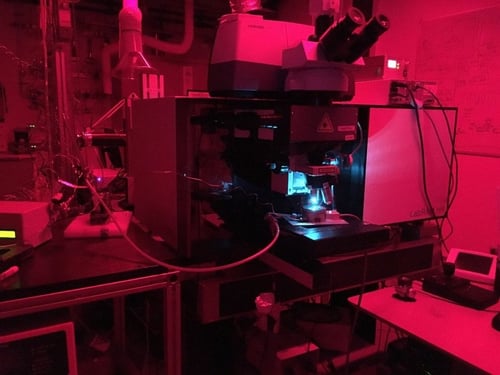 Front view of one of our Raman microscopes during an operando experiment.

I inherited the responsibility for the optical spectroscopy in Topsoe in 2010. Since then, I have been trying to further develop the methods and infrastructure to monitor our catalysts in dedicated reactors while they are actually working. This type of methodology is often called “operando spectroscopy” and has become a dedicated field in catalysis research. It is based on the idea that catalysts, and in particular the surface of catalysts, are very dynamic under reaction conditions, and, if we really want to understand the active state of a catalyst, we need to look at it while it is doing its job. That is of course easier said than done.

Ideally, we would use a conventional reactor, which is also used for lab-scale catalytic testing, and modify it to get access to the catalyst surface with an optical probe (a laser or other light source). However, in many cases we have to design new types of reactors that allow us to combine the catalytic testing with spectroscopy. The operando methodology is not limited to spectroscopy techniques related to catalysis, but also includes diffraction and microscopy techniques that are used to characterize functional materials while they are performing under realistic conditions. 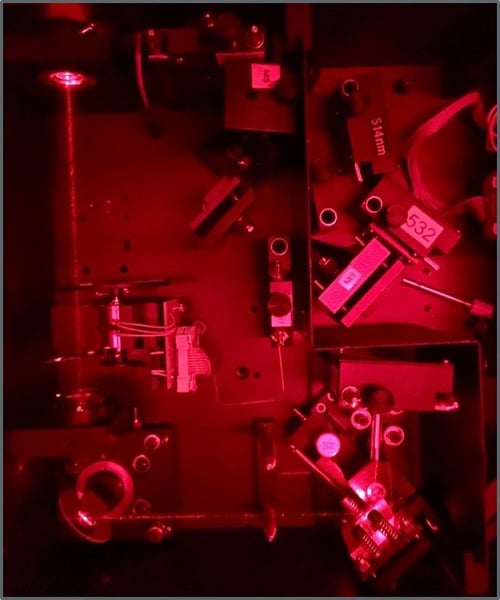 Top view into the optical path of the laser beam when coupled into the microscope.

A number of our products have already profited from the applied operando methodology. For example, for the development of our VK catalyst series we have combined in-situ TEM and operando Raman spectroscopy to obtain a better understanding of how the active melt distributes on the surface of the silica support during sulfuric acid synthesis. The active melt is only formed under reaction conditions and therefore operando methodology is a requirement if we want to understand how these catalysts work. VK catalysts are specifically designed for oxidizing SO3-strong gases and achieving significant reductions in SO2 emissions.

The Topsoe Improved Gasoline Synthesis, or TIGAS™ process, is another example. The coking of the zeolite based catalyst was monitored by operando X-ray diffraction and operando UV-Raman spectroscopy and provided us with unique insight on how the catalyst deactivates during reaction. The TIGAS™ process makes it possible to produce high-quality gasoline from natural gas, shale gas, associated gas, coal, pet-coke, and biomass.

Operando spectroscopy is also used to improve the performance of our unique catalytic filters, TopFrax™. The filter is made from a ceramic material which contains a catalyst that is active in the selective catalytic reduction (SCR) of NOx from off-gas by utilizing ammonia to convert into harmless nitrogen and water.

I believe the scientific work performed at Topsoe is not just “nice to have”, but it's something that strengthens our business and builds trust with customers. We develop the best products because they are based on our fundamental understanding of catalysis – just like Dr. Topsøe intended. This knowledge needs to be continuously broadened and, more importantly, maintained. That’s what we strive to achieve every day. 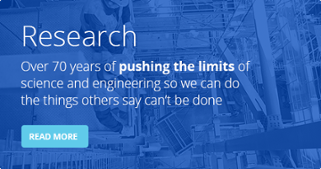