EIB is the long-term lending institution of the European Union owned by its member states. It makes long-term financing available with attractive terms and conditions for investment in order to contribute towards EU policy goals.

EIB has evaluated and granted the loan to support the R&D activities of Haldor Topsoe from 2013-16 and the investments backed by EIB will focus on the development of catalysts and related technologies for different industry sectors including energy, refineries and chemicals. In addition, environmental applications using catalysis to remove harmful compounds from the engine exhaust of vehicles as well as industrial off-gases from power plants and industry are part of the framework.

EIB Vice-President Jonathan Taylor said: “We are happy to sign this agreement with Haldor Topsoe, which will result in the launch of new and improved catalysts bringing benefits to the environment and society. With the EIB financing in place, the company will be able to enhance its knowledge and expertise in the field of energy efficient catalytic technologies. This is of particular importance for us, as one of EIB’s goals is to increase the potential of the European knowledge economy.”

“In the coming years Haldor Topsoe will intensify its R&D effort as part of our “30 in 25” growth strategy that outlines how we plan to achieve DKK 30 billion in revenue in 2025 based on our strengths and R&D potential. The EIB loan will support this effort and we are very pleased to have signed the agreement,” said Peter Rønnest Andersen, Chief Financial Officer in Haldor Topsoe. 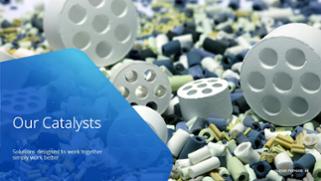 Gaz Sintez has nominated Haldor Topsoe as licensor of its methanol plant in the Leningrad Region, Russia. The plant will produce 1.6 million tons per year of АА grade...
1 min read