How can electrolysis of water help to produce fuel for your future car?

The simplest element of the periodic system and the most common atom in the universe is hydrogen. This abundant matter could very well be extremely important in humanity’s quest to build a future with little or no use of fossil fuels. Using electricity from windmills (or solar panels), water can be split into oxygen and hydrogen – and the latter used as an extremely clean and versatile fuel.

The technology is well-proven. Topsoe manufactures solid oxide electrolysis cells (SOEC) that use electric power to produce hydrogen from steam at high temperature, which makes it the most efficient electrolysis system known today. When the electrolysis of water is powered by renewable energy from for instance windmills or solar panels, the production of hydrogen leaves a very small environmental footprint. 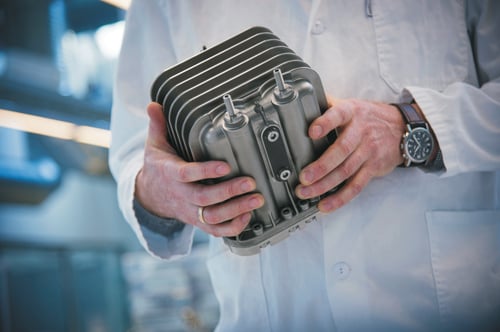 The heart of Topsoe's electrolysis technology, the SOEC stack.

Using electric power to produce clean fuel can also remedy another problem. Energy production from wind and sun fluctuates as the wind blows or the sun shines. This means that sometimes there is a surplus of energy, sometimes a deficit. But SOECs can level out the fluctuations by transforming surplus electricity into hydrogen that can be stored so it is ready for consumption when wind and sun can’t cover our need for energy.

Hydrogen can serve a multitude of purposes. Already today, established car makers offer hydrogen-powered vehicles based on fuel cells that convert hydrogen back to electricity that powers the engine.

To add to that, hydrogen can be used in a sustainable setup for upgrading biogas to pipeline grade natural gas that can be used directly in the existing infrastructure. This is an excellent way of storing surplus electric energy.

SOEC technology can also open up for a whole new segment of green and sustainable chemicals from renewable carbon sources. Our eCOs™ solution is an example. It uses SOEC to reduce the greenhouse gas CO2 to CO gas that has many applications in different industries. The eCOs™ solution lets customers produce very pure CO gas on-site and on-demand in quantities that they would otherwise have to get in tube trailers or cylinders. eCOs™ is an example of a SOEC technology that is cost competitive vis-a-vis traditional production.

However, the future is not here yet. The cost of producing hydrogen with any of the electrolysis technologies that are available today is still significantly higher than the cost of producing hydrogen from fossil fuels. At Topsoe, we are convinced that catalysis will play a crucial role in solving the energy challenges we all face. Whether the future energy carrier of choice will be hydrogen remains to be seen. It could just as well be methanol. Or ammonia. Or none of them. Or a combination.

Which solution turns out to be right one will depend on the environmental footprint, how easy it is to store and use, security of supply, and many more factors, including the very important issue of cost.