Topsoe will provide license, basic engineering, catalysts, and proprietary hardware for the methanol plant which will be based on Topsoe’s two-step reforming technology.

“We have chosen Topsoe for this very important project because they came to the table with proven and reliable technology, very competitive pricing and a long-standing presence in Russia. We look forward to realizing Russia’s most modern and effective methanol plant together with Topsoe,” says Mr Taras Ganaga, CEO Nakhodka Mineral Fertilizer Plant.

“We are pleased that Nakhodka Mineral Fertilizer Plant has selected Topsoe technology for their flagship project. This signals both confidence in our technology and our dedication to the Russian methanol industry. We look forward to deliver a world-scale methanol plant in partnership with China Chengda Engineering Co.,” says Amy Hebert, Deputy CEO of Haldor Topsoe.

The world-scale methanol plant will be located near the major Russian seaport Nakhodka in the Primorsky region with an intent to export its products to the Asia-Pacific Region. 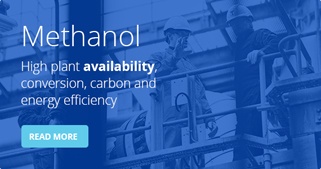 About Haldor Topsoe A/S
Haldor Topsoe is the world leader in high-performance catalysts and proprietary technologies for the chemical and refining industries. Based on cutting-edge research and development, we help our customers achieve optimal performance in all phases from design to daily operations – in the most responsible way. Topsoe is headquartered in Denmark and serves customers across the globe. In 2018, our revenue was approximately 890 million US dollars, and we employ more than 2,300 employees. www.topsoe.com

About NMFP
Nakhodka Mineral Fertilizer Plant is developing a modern gas-to-chemical facility in the Far East of Russia with planned total capacity up to 1.8 million tons of methanol and up to 1.8 million tons of ammonia. The Project has its own seaport and is advantageously located to the growing markets of South-East Asia. The feedstock natural gas is secured by long-term agreement with Gazprom, Russian leading gas supplier.