*) IFRS 16 was implemented using the modified retrospective approach, and 2018 comparative figures have not been restated.
**) An incident in 2018 was recategorized to be a lost time accident because it led to lost work time in 2019. Accordingly, the lost time accident frequency for 2018 was adjusted from 3.1 to 3.4.

Topsoe’s operations of delivering technology, catalysts, and related services to the chemical and refining industries remain very profitable. In 2019, revenue was DKK 5,931 million, while EBIT reached DKK 855 million. EBIT margin was 14.4%, and net profit was DKK 627 million. Revenue and EBIT were positively impacted by a one-time effect of DKK 49 million from special items. Adjusting for these special items, the adjusted EBIT was 806 million, while the adjusted EBIT margin was 13.6%.

“2019 was a record financial year for Topsoe, and we remained global market leader within our business areas which remain solid and highly profitable. I am very satisfied with the results and particularly that the strategic focusing of the company during the last years has translated into a further increase in revenue and a significant increase in profitability despite a challenging market situation. It is also very encouraging that our company is taking a very prominent position in offering new sustainable solutions for the chemical and refining industries, not least within renewable fuels,” says Bjerne S. Clausen, CEO, Topsoe.

Strong increase in catalyst revenue and growing order backlog
Catalyst revenue grew by 13% in 2019, significantly above the average market growth. Technology revenue decreased by 11%, mainly due to significantly reduced business activities in the Middle East due to US sanctions. The refinery business showed very strong overall performance. The chemical business delivered satisfactory catalyst revenue and continued progress in the number of signed technology licenses. These contracts are expected to lead to major technology and catalyst orders in the coming years.

At year-end, the order backlog had increased by 30% compared to one year before.

Supporting the UN Sustainable Development Goals
Based on the company’s unique insight in chemistry and catalysis, Topsoe is very well positioned to support its customers in addressing some of the world’s biggest challenges as defined in the UN Sustainable Development Goals (SDGs). This includes developing solutions that help industry become more energy-efficient and environmentally friendly. This scientific leadership will also be crucial for developing sustainable solutions that will help our customers in the green transformation. In 2019, Topsoe achieved a commercial breakthrough for its renewable fuel technology, HydroFlex™, that can convert almost any renewable feedstock into gasoline, diesel, or jet fuel. In addition, the company has a strong pipeline of sustainable and energy-efficient technologies.

In 2019, Topsoe was invited to participate in four of the thirteen Climate Partnerships established by the Danish government to involve businesses in supporting the ambition of a 70% reduction in greenhouse gas emissions in Denmark by 2030.

Improved safety
Topsoe’s continued drive to improve safety has led to a significant reduction in the frequency of lost time accidents (LTAs) per one million working hours. In 2019, the company achieved a frequency of 2.0 compared to 3.4 in 2018 and 6.3 in 2017.

The coming year
As announced on February 17, 2020, Roeland Baan has been appointed new Chief Executive Officer (CEO) of Topsoe as of June 1, 2020. Roeland Baan takes over from Bjerne S. Clausen who retires.

Topsoe expects to maintain a high level of R&D activities at approximately 8% of revenue in 2020. 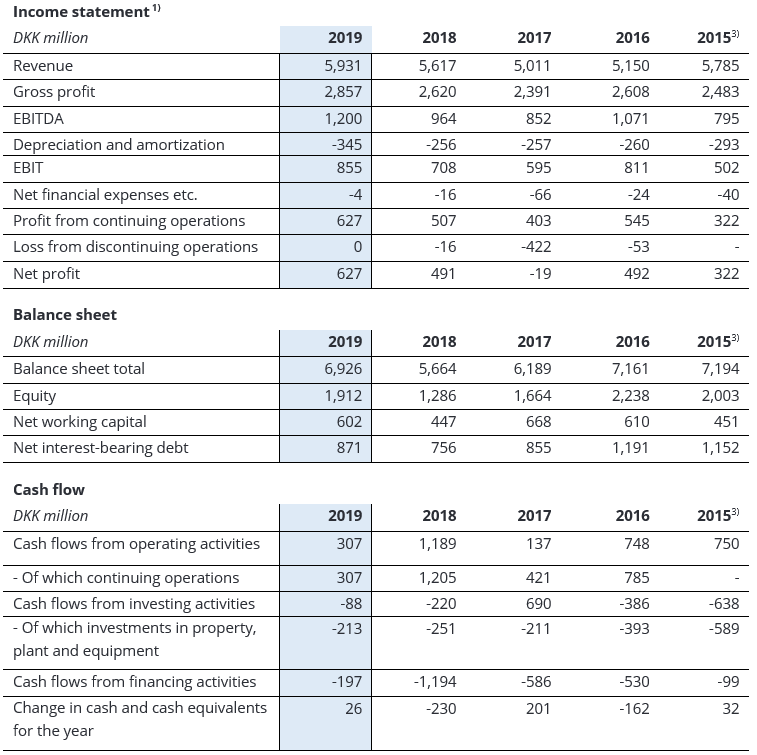 Haldor Topsoe A/S cautions that a number of factors, including those described in the risk management part of the Annual Report, could cause actual results to differ materially from those contemplated in any forward-looking statements.