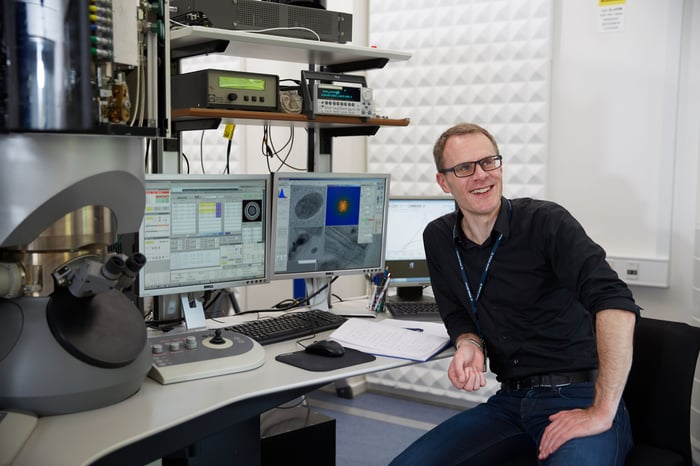 Stig Helveg has been honored with the 2019 Innovation in Materials Characterization Award for his profound accomplishments in electron microscopy advances in catalysis.

“When we started this work 20 years ago, it was a daring experiment. We wanted to learn more about catalysts but it wasn’t a given that we would succeed and overcome major obstacles and develop brand new ways for operating electron microscopes. Now, it has become a whole research field in itself and people are building further on our knowledge,” says Stig Helveg.

Stig and his colleagues’ research and development work has given Topsoe a leading edge in the area of electron microscopy. By facilitating the microscope, Topsoe provided the researchers with an opportunity to look at the catalysts at the atomic scale, giving the most detailed understanding of how they develop and behave, and ultimately helping produce some of the best catalysts in the world.

“At Topsoe, we have a great environment for innovation and we’re good at figuring out new knowledge and exploit it in R&D; the prize is just one example. I am truly honored and proud to receive the award but I’m getting it on behalf of many talented colleagues who have contributed to this research over the years. The award is a tribute to their effort and I am just part of it,” adds Stig.

Topsoe reinvest about 9% of the company revenue into research and development.

The Innovation in Materials Characterization Award is awarded by the esteemed Materials Research Society (MRS). It honors experts whose outstanding advance in materials characterization has increased knowledge of the structure, composition, in situ behavior under outside stimulus, electronic behavior, or other characterization feature, of materials.

Stig Helveg has a PhD in Physics from Aarhus University, Denmark. Following his PhD, he joined Topsoe as a postdoctoral researcher and later became a staff scientist in 2003. Today, he serves as a Fellow and leads the company’s activities on in situ electron microscopy in Catalysis R&D.

More about the MRS Awards

The Innovation in Materials Characterization Award is a part of the MRS Award program. It recognizes the exciting and outstanding achievements and honors those whose work has already had a major impact in the field, and those who are outstanding exponents of science.