"We are glad to congratulate Shchekinoazot on the launching of the methanol and ammonia co-production plant. This is a major milestone, the result of work done by highly-skilled Shchekinoazot specialists and a huge team of Topsoe professionals," says Amy Hebert, Deputy CEO and EVP, Chemicals, Haldor Topsoe A/S. 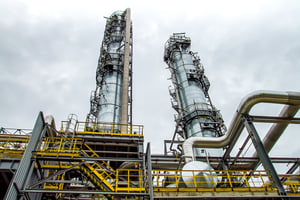 IMAP™ (Integrated Methanol and Ammonia Production) technology uses an efficient process scheme that minimizes both capital expenditure and operating expenses as the conventional CO2 removal and CO shift sections are not necessary. The UCC Shchekinoazot co-production plant is the first in the world to produce more methanol than ammonia.

"This project is a result of a long-term fruitful collaboration between our companies," continues Amy Hebert.

Collaboration between UCC Shchekinoazot and Topsoe dates back to 2007 when the construction of the first methanol plant started – it was launched in 2011. In 2012, a hydrogen unit with the capacity of 26,000 Nm3/hr was built and commissioned. All three units use state-of-the-art Topsoe solutions adapted to the needs of UCC Shchekinoazot.

UCC Shchekinoazot is currently implementing their third methanol production plant under Topsoe license with a capacity of 500,000 tons of methanol per year. The groundbreaking ceremony also took place at the official event on September 7. 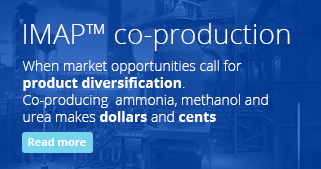